Taken by ALLEN.. while flying over.. 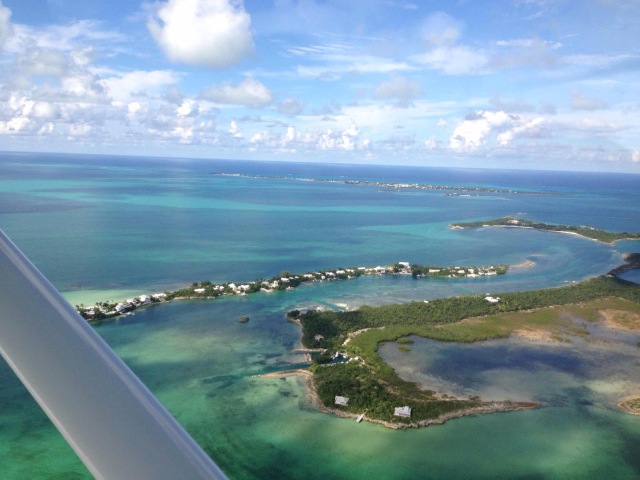 As we fly over he was talking to me.. but I was in awe of the little island in sight 🌴.. so full of excitement.. couldn’t wait to get down there..
The engine of the plane ✈️ drowns out his voice.. I look over at him…I’m smiling so widely..he looked over at me.. smile. Chuckles a little in amusement to my look of excitement.. As he starts to to dive downward for landing .. I gave out a little scream … in eager anticipation…  he laughs out loudly.. holding his head back as he laugh so amused as he watched me..

he reached over.. with the back of his palm…placed it on my cheek and gently and lovingly caress it…I unconsciously leaned onto his hand…closed my eyes for a moment.. enjoying his gesture….and felt a surge of the sweetest sensation rushing through me..

I turned looking at him and smile shyly …. blushing 😊 . he pulled his hands away as quickly  as he put it there to take hold of the controls for landing…

I as quickly recover from his touch as we start to hit ground and a new wave of excitement took over.. we’re here.. I  giggled  joyously..

I just couldn’t wait to get out. I was squirming in my seat .. so filled with the excitement of finally having the chance to be here….

He got out… and held my hand as he gently help me out..  another wave of emotional sensation hit me at the touch of his hand..

He climbed back in to retrieve a bag and a basket… as I busily take in my new surroundings with a permanent smile… and a surplus of super excitement and elation….

He came back out .. secured the doors.. and started to walk forward.. he beckons me with his head.. as he said.. “come on sweet girl “.. I scurried after him..

As I watched him from behind.. his quick strides.. his board shoulders.. his strong legs..I was caught up in a feeling of desires and I was thinking how lucky I was to be here with him..

He jerk Me from my thoughts.. as he looked over his shoulders and asked.. “are you coming?”..

I ran up to him.. talking a mile an hour … telling just how beautiful everything is..

He just smile in agreement with me..

And all of a sudden we were on the beach.. he was laying a towel down.. and I walked towards the water.. standing there just taking it all in. Feeling so happy to finally be experiencing this island with him…

I was lost in thoughts.. when I felt his arms encircling my neck .. arms resting just above my breasts…wrapping me in a hug.. as he pulled me to him.. I jumped at his actions but  easily relaxed in comfort of his hug.. I automatically placed my hand on his arms and he reach for my fingers and entwined them between his..

I leaned my head back onto his chest and he rest his cheek against the side of my head.. and he softly whispered..

“Wendy… it was you I fell in love with..sweet girl…not her picture.. you..” and he hugged me a little tighter..

I was overwhelmed with emotions by his declaration…words I always wanted to hear and believe..

I couldn’t speak…. I felt my throat become tight and constricted with a lump.. my eyes filling with tears .. I blink trying to stop the threat of the tears.. and avoid the spill.. i try to swallow the lump but.. instead I made a sobbing sound.. and I felt the tears rolling down my cheek onto his arm.. I subconsciously reached up to wipe away the running tears….
He held my shoulders.. and turned me around.. I held my head down..not wanting him to see my tears… he put his fingers under my chin.. and urge my head upwards… I opened my tear fill eyes… he used his thumb to wipe away the fallen tears.. as he gently caress my cheek with it…without saying a word..

His eyes were so kind.. his  face was tender with emotions..his touch was gentle on my skin.. I looked away and again held my head down.. he reached and cupped my face in both hands pulling my face back upwards..

I was Now sobbing … trying to fight the feelings of crying..and I closed my eyes to avoid his piercing blue eyes and to try to calm my emotions ..

he still had my face in his hands using his thumb gently running up and down my cheeks .. occasionally brushing away my tears.. as they escape from my eyes..

I could feel his eyes burning through me..  feel the warmth on my face with each breath he took…my heart was thudding loudly against my chest.. my knees were becoming wobble beneath me .. as I melt with the electrifying touch of his hands…

I opened my eyes and tried to smile between the tears…. he smiles back.. his face moves in closer.. and my lips was quivering in anticipation of his lips on mine..

My heart was racing … sending a surge of  adrenaline That fill me up..with raging desires..I tilt my head Back.. and  I automatically tiptoed to meet his kiss…

My heart was still racing.. I was feeling full of desires..  and I was waking up realizing it was all but a dream…

We had a very short conversation about Cedar Cove… and I guess my subconscious was still dreaming of that flight date he  had suggested ..

Ever since he mentioned that little romantic island 🌴… I have always wondered  and fantasize what it’d be like to actually fly there for a date… with him..

I know I have lost that one opportunity with him… and that remains one of my biggest regret of all..

I kept hearing those words he said.. keep seeing his face.. feeling his touch.. and so mad that I woke up just before he kiss me…